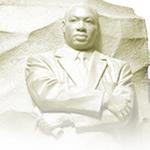 Our nation's capital is an exciting place to be this week. Why? The long awaited Martin Luther King, Jr. Memorial officially opens to the public today, Monday, August 22, 2011.   The 30-foot sculpture of the civil rights icon is situated on a four-acre Tidal Basin site, in a direct line with the Jefferson and Lincoln memorials. It's open today from 11 a.m. to 10 p.m. and Tuesday through Thursday from 9 a.m. to 10 p.m. leading up to a public dedication ceremony Sunday, August 28, at 11 am. (Note: Hurricane Irene pending arrival caused Memorial Dedication to be  postponed  to October 16, 2011.) Numerous special events are planned for Dedication Week—the days leading up to the official dedication ceremony. If you can, make sure you attend at least one of the events surrounding this historical occasion. Available website resources include:  About the Memorial, Build The Dream Virtual Tour, Memorial Project, Explore the Memorial, Public Expo, In His Own Words, and Washington, D.C.  A friend and college classmate who visited the Memorial today, emailed

… I walked about 1.5 miles from the Farragut West Metro Station, past the Viet Nam, Lincoln, and Korean Memorials to the site. It is awesome and a stunning vision to behold. As I trudged along, I would not permit myself to be 'no ways tired', and remembered the umpteen parades I marched in as a majorette many moons ago and the many marches Dr. King led.

The chain-link fences are down; however, plants have yet to be placed. Many people were there representing all hues and colors; however, you could easily move around and view the entire site. Locals are encouraged to visit today through Thursday and allow those traveling to DC for the dedication full access on Sunday. I will watch the unveiling ceremony on television. It is a must-see memorial for sure…

Dr. Martin Luther King, Jr.'s contributions/gifts to a better world are immeasurable.  Briefly, he was an American clergyman, activist, and prominent leader in the African-American Civil Rights Movement.  While his contributions to the civil right movement are numerous, some of  his best known include:

In summation, Dr. Martin Luther King, Jr. was a philanthropist---one who uses their time, talent, and treasure for the common good. Honors And Awards that Dr. King received include: 1964 - the (youngest person to receive) Nobel Peace Prize for work to end racial segregation and racial discrimination through civil disobedience and other nonviolent means; 1977 - the Presidential Medal of Freedom, awarded posthumously; 1986 US Federal Holiday established in his honor;  2004  the Congressional Gold Medal, awarded posthumously; and 2011 Martin Luther King, Jr. Memorial—the first on the Mall honoring an African American. “His words, now carved in granite on the National Mall, are a testament to his legacy and its enduring ability to shape lives and destinies around the world.”

If time permits, please answer the questions below. Your responses will be shared with educators and authors. ( "Leave Your Reply" Below)

We should always have three friends in our lives-one who walks ahead who we look up to and follow; one who walks beside us, who is with us every step of our journey; and then, one who we reach back for and bring along after we've cleared the way.